Are Microspikes Worth It? A Buyer’s Guide

During blistering weather with snow and ice, hikers turn to microspikes for a safer journey. However, are microspikes worth it? Considering there are other comparable options, microspikes have their advantages and disadvantages.

Microspikes provide a cost-effective and beginner-friendly option for providing enhanced traction on slippery terrain. Their compatibility with a wide range of footwear and compact size and weight are also an added benefit over crampons.

In this guide, I’ll be diving into further into microspikes and cover when they’re useful, their pros and cons, and briefly compare them to other options.

Microspikes are an essential footwear device for hiking or other snow activities.

Microspikes are considered a winter traction device, with crampons and snowshoes being the other two options hikers use depending on the conditions.

In particular, microspikes are stainless steel spikes on an elastomer harness, wrapping around shoes, providing hikers and others more grounding and balance on challenging terrain. 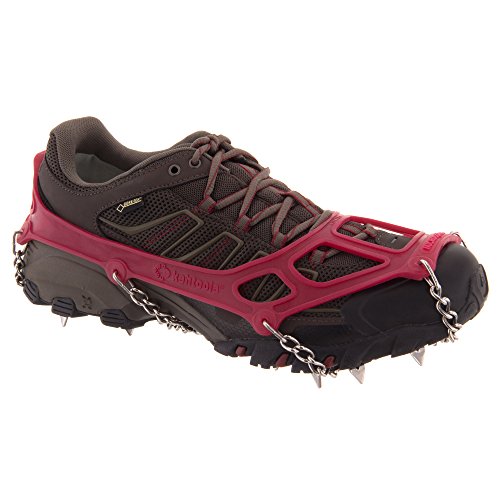 The best quality microspikes have the following features:

Overall, microspikes are supposed to be lightweight and easily pull over your boots, with the spikes penetrating hard ice and snow to avoid slipping and sliding on hikes.

Lighter and tougher, the new MICROspikes deliver unrivaled traction on icy winter trails. With stainless steel spikes and welded chains tough enough to handle any adventure, they are now designed with an integrated toe bale and reinforced eyelets, allowing for a 50% lower profile elastomer harness.

When Are Microspikes Useful?

Microspikes have made a name for themselves because of their various uses, in most winter terrain, providing hikers with stability and other activities.

Microspikes are useful for the following conditions:

Overall, microspikes are useful for most winter environments where traction is needed to improve your stability and avoid injury!

There are several advantages to microspikes that make them attractive to hikers of any level.

Continue reading to find out the pros of owning microspikes.

An aspect that draws hikers to microspikes is their affordable price tag.

While the most popular brand of microspikes comes from Kahtoola, it is the most expensive on the market. Luckily, other alternatives are suitable for the budget-conscious, which is comparable to the brand.

However, I’d caution against going cheap on something like microspikes. The rubber is more likely to fail over time compared to the durability of a better known brand like Khatoola, and that’s not something that you want to have happen on an icy hike!

Microspikes are both small and lightweight enough to carry in any backpack or keep in the car, even during winter months.

This makes it extremely easy to justify keeping them with you when you’re not worried about excessive weight or space as might happen with more traditional crampons.

It’s simple to clean microspikes, requiring a quick wipe down and dries for a short period.

The most common way to clean microspikes is with warm water and air dry, as harsh terrain in sleet, gravel, or muddy areas can get the device dirty.

Other winter traction devices require sharpening, but microspikes do not, which saves money and time.

Microspikes are easy to put on and pull off, which is extremely convenient during hiking or a long journey.

This not only saves time but hassle when you’re just trying to reach your final destination at the end of a long day!

Microspikes aren’t just for hiking, but useful for other activities, such as running or trekking!

I’ve even used them while hiking the steep muddy slopes in Hawaii, so they’re useful in warm climates as well.

For those living in locations with strong winters, microspikes can also be handy for daily activities. Whether it be shoveling the snow off your driveway or taking your dog for a walk, wearing your microspikes is a good way to avoid a wipeout!

Most elastomer harnesses with TPU or more advanced technology are long-lasting. High-end materials plus proper maintenance is the key to increase the longevity of microspikes.

While microspikes have their positives, there are negatives as well. Let’s take a look at some of these now!

A common complaint of microspikes is that it shifts to the left or right after prolonged usage. This results in the microspikes becoming crooked, which may become uncomfortable.

A typical solution that may fix this is to get a better sizing of your microspikes that fits your shoe. However, that may not solve the problem for everyone.

Only for Certain Conditions

While microspikes are useful in most conditions, it isn’t for a harsh, challenging terrain. Think climbing Mount Everest or K2!

If you’re an advanced hiker or mountaineer that adventures into tons of snow and ice, microspikes will not be sufficient with deep inclines. At that point, a more advanced winter traction device may be useful, such as crampons or snowshoes.

Microspikes are the most effective on flat terrain with snow or flat ice.

While microspikes are lightweight, it may not be for those new to hiking or winter traction devices as a whole.

The added weight may tire down some hikers, especially beginners. However, with practice and use it’s something that most people quickly get used to.

What’s the Difference Between Microspikes and Crampons?

There are three types of winter traction devices: microspikes, crampons, and snowshoes.

However, microspikes and crampons are the most comparable to each other due to the design and purpose.

Although there are differences between microspikes and crampons, such as:

Factors to Consider: Microspikes vs. Crampons

While there are differences between microspikes and crampons, there are factors to consider between these two winter traction devices, such as:

In all, both crampons and microspikes have their positives and negatives.

Both excel in certain environments, with microspikes being the perfect winter traction device for the inexperienced.

Many hikers who want that extra challenge in the winter may continue to wonder, “Are microspikes worth it?”—the answer depends on the hiker and their experience level.

However, microspikes are a great option to start if you’re looking to take hiking to the next level in the snow and ice. Also, microspikes allow outdoor enthusiasts to try something new using a secure and safe device.

Lastly, it’s affordability, versatility, and low maintenance make it an attractive purchase to include in a hiker’s arsenal.

If you found this article helpful, then make sure to also take a look at my other related articles!

Hi, I'm Zach Reed and I'm a Colorado-based outdoor lover! For more information about me, take a look at my dedicated about me page.

Hi, I’m Zach! From hiking and backpacking to camping and mountain biking, I LOVE spending time in the beautiful outdoors. I decided to create this website to be a resource for anyone else who wants to maximize their enjoyment of the outdoors as well!

We are a participant in the Amazon Services LLC Associates Program, an affiliate advertising program designed to provide a means for us to earn commissions by linking to Amazon.com and affiliated sites.